Alan was born in Providence, Rhode Island, in 1947, to first generation Italian-American parents. Growing up, Alan dreamed of being a coach. He was an outstanding high school athlete, excelling in wrestling, cross-country and outdoor track, and he was captain of his high school wrestling team. In 1965, Alan attended Springfield College, in Springfield, Massachusetts, to pursue his dream of becoming a coach and educator. Springfield College is the birth place of basketball and home to the Basketball Hall of Fame. The YMCA movement also had its beginning at SC. The values of sports and service were to shape Alan’s life forever. While attending Springfield College, Alan was captain of the wrestling team, sports editor of the school newspaper, and worked as a financial representative of Northwestern Mutual Life. During his senior year, Alan coached the local high school cross-country team, leading the team to both a High School State Championship and a New England Championship.

In 1969 Alan returned to Rhode Island; started a financial service business, with his childhood best friend, Harry Hoopis. That same year he became the assistant wrestling coach at the University of Rhode Island. At the time the URI wrestling team ranked 35th out of the 35 teams in New England. In 1973, Alan became the head coach and the team went on to win three out of four New England Championships (Division I). Alan was voted New England Coach of the Year all three years and in 1993; Alan was inducted into the URI Sports Hall of Fame.

In 1977 Alan refocused his energy and attention on his financial service clients and developed innovative ways to insure athletes. This helped sports teams indemnify themselves against the possible disability and/or death of its star players. Bridging a gap between teams and players and setting a 35 year career as a sports agent in motion. Alan continues to achieve recognition for his innovations in the sports management world. The Sporting News voted Alan as the 6th Most Influential Behind-the-Scenes Person, in the annually published “Top 100 Most Powerful Figures in Sports.” Most recently, Street and Smith’s Sports Business Journal recognized Alan as one of the Top 20 Most Influential Agents in Sports.

Although Alan is most known for his work as a sports agent, negotiating some of the largest contracts in Major League Baseball, he takes more pride in developing winning relationships with people around the world and dedicating himself to his family. A value he learned from his parents growing up. Alan has always found pride in helping others, whether coaching, selling insurance or advising and managing athletes, he finds a tremendous amount of gratification in his service to others. For this reason he recently was awarded an Honorary Doctorate Degree of Humanics by his Alma-mater Springfield College.

Alan has been married to his wife, Lia, for 37 years. They have two children, Alana and Lou-Jon, and four grandchildren, Julia, Brody, Cooper and Emory. Alan and his wife reside in Lake Forest, and spend their summers in Rhode Island. 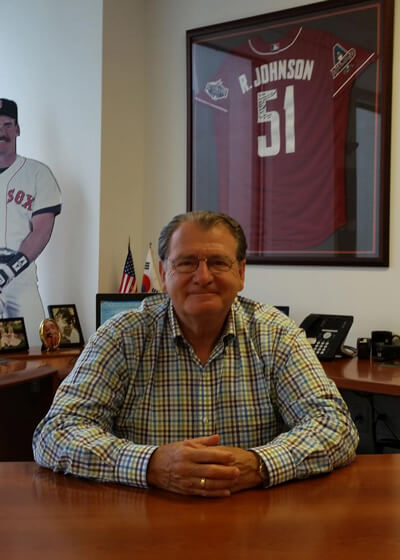